Back Questions about mounting your Bar Codes? Fuzz Bites - Which Direction?

When we first released the JConcepts Ellipse tires (#3196), we had to compete with one of the most successful indoor tire or all time, the BK inspired JConcepts Dirt Webs. It was no easy task, but over time we are starting to see the Ellipse tires winning on all levels including at the talent-filled JConcepts INS events and recently at the ROAR Fuel and Electric Nationals..... and it's only the beginning. One of the coolest features built into the Ellipse tires is that the tires are in fact, directional. Depending on which way you mount the tire, which we call the orientation "forward" and "reverse" for simplicity, you get a different driving characteristic that could measure into tenths. Maybe you've messed around with it a bit, maybe you haven't, but here's the low down on this awesome tire tech.

Remember, there's a preferred way but no right or wrong way to mount the Ellipse tires. The most important thing is to mount them so they are matching and you don't end up mounting one forward and the other reversed. Another awesome tip is to double-check the orientation before dropping some glue down.

WHICH WAY DOES WHAT??

Forward Direction - Most of the JConcepts team drivers mount the Ellipse tires in the "forward" direction. They find that in this direction, the tire accelerates like a bat out of hell and is a very desired trait for most pro racers. There's is less side-bite in this direction as the tire releases earlier in the corner than when mounted in the "reversed" direction. Also, keep in mind for running in the forward direction..... since the tire releases earlier in the turns, most of the top guys are compensating with more throttle to utilize that added forward traction to make the car exit faster and over a period of a lap is actually faster. Your acceleration advantage may slightly vary depending on the grip levels and layout. Reverse Direction - In this direction, the forward acceleration is still good, but the forward rip is not as mighty as when the tire is mounted in the "forward" position. However, mounting the tire in this direction gives you a little extra grip while in the corners. There is more natural side bite and the tire feels more predictable upon corner entry, mid, and exit..... much more like the Dirt Web. This direction seems to favor the smoother driving style that relies on the car doing most of the work rather than having to muscle the car with quick throttle and steering inputs. Next questions... so how do you tell which direction is which? The Curved Line.

The "curved line" method is what Jason looks at when he mounts his tires. This is done by looking at the curved line vs the straight line that it intersects. The curved lines flow towards each other and flow "forward" going outward to inward. Or if the curved lines flow backward, then the tire is mounted in the "reverse" direction. Check out the illustrations above to get a better visual understanding. The Trapezoids.

Another way to easily tell which direction you have the tires mounted is by looking at the trapezoid shape in the middle of the tire. This repeating shape might be easier for some to spot over vs the curve line method when telling the orientation of the Ellipse tires. 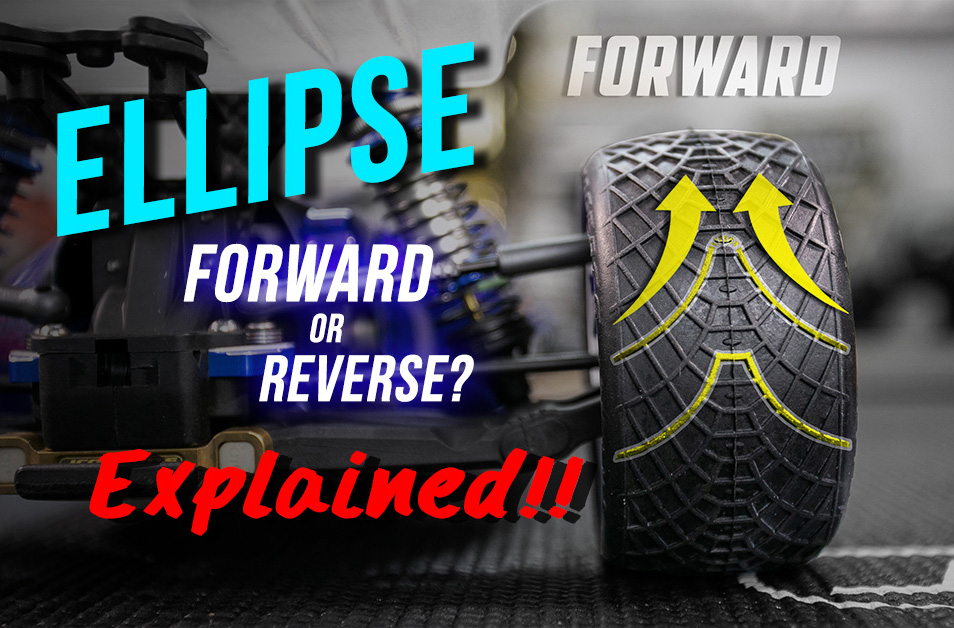