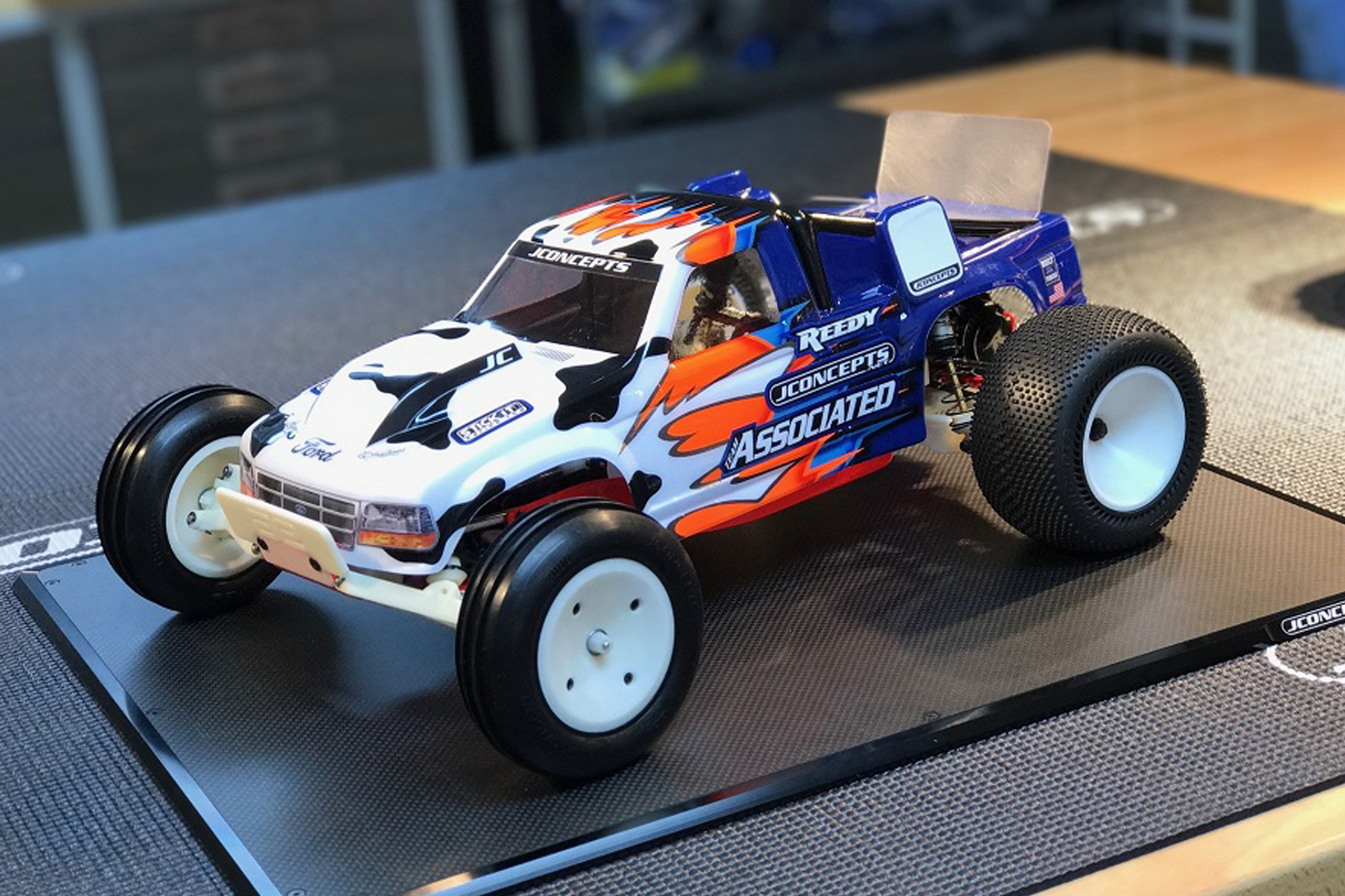 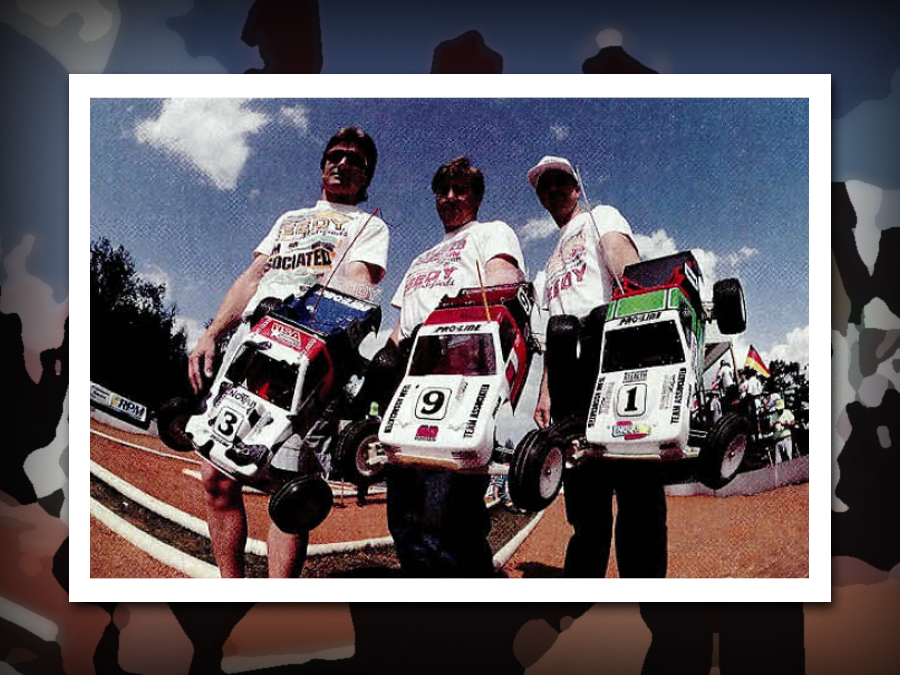 That all changed at the 1990 Florida Winter Champs as the A Team debuted a trio of prototypes RC10T trucks to compete in the Modified Truck Class. 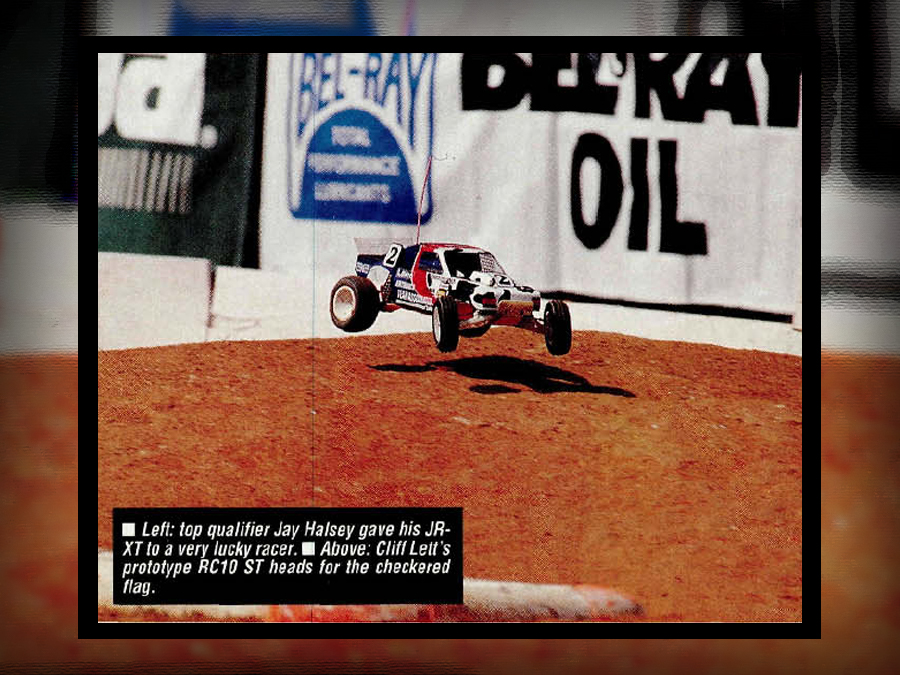 Originally called the RC10 ST, this new vehicle shared many components with the RC10, but it was a true kit with unique parts designed for the RC10T and not simply a conversion kit. 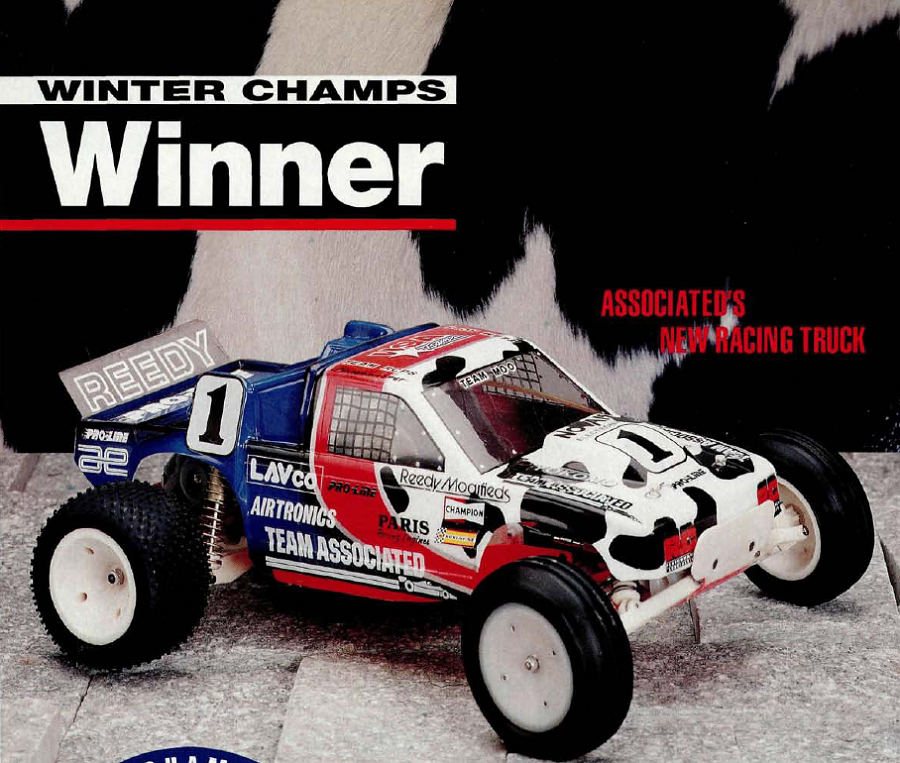 Two of these trucks would qualify to make the A Main, and factory pilots Cliff Lett and Butch Kloeber would finish 1st and 2nd overall. 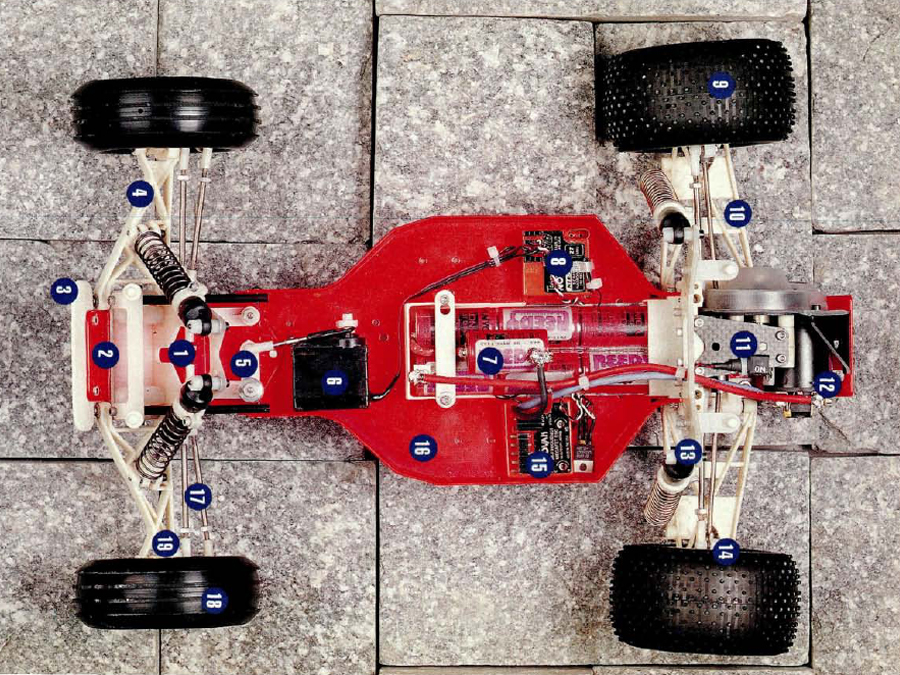 All three trucks used an aluminum chassis that were each uniquely powder coated a different color (fluorescent red, green, and orange). Cliff Lett’s truck used the fluorescent red chassis, and his iconic cow paint scheme is still one of the most recognizable in RC today. In this edition of the Garage we team up with experienced builder Jason Csontos to create a classic RC10T decked out with today’s electronics and JConcepts option parts. 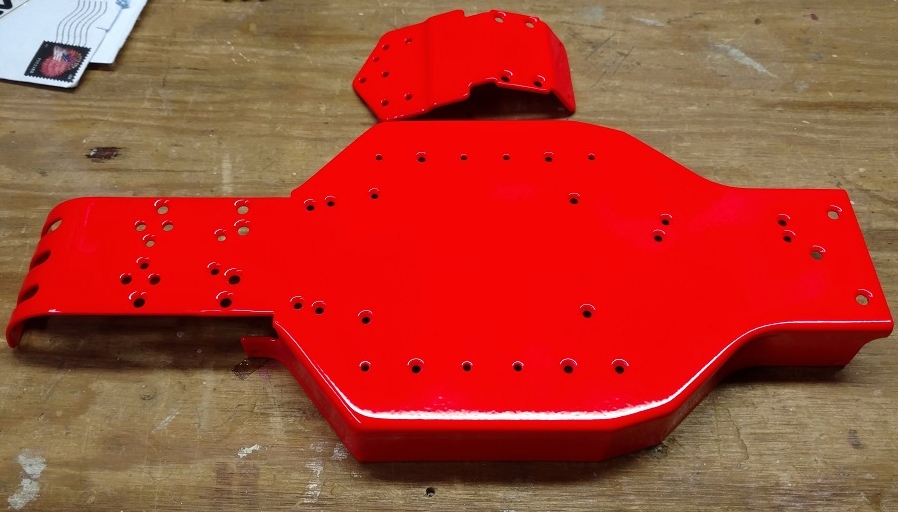 The first order of business was to take an assembled vintage RC10T and tear it down for the new build. The aluminum chassis and nose plate was powder coated in red to match Lett’s setup. After that was completed it was time to start reassembling the truck with modern option parts and electronics. 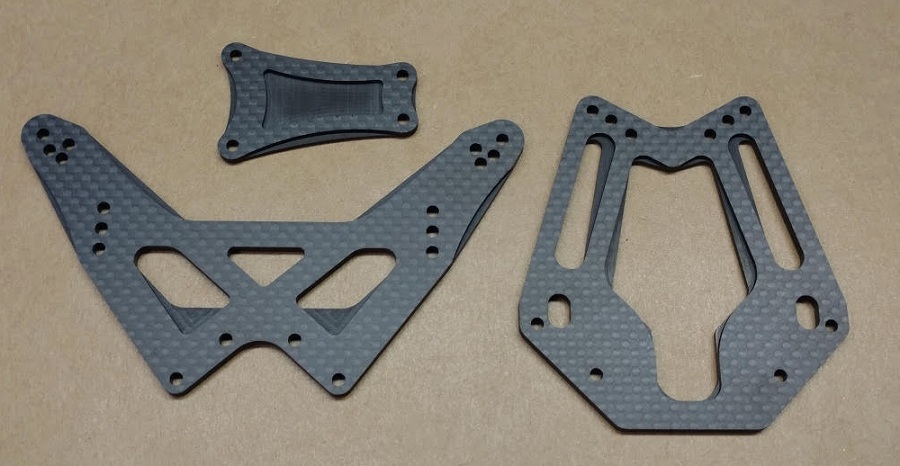 The original fiberglass shock towers and molded white plastic stealth transmission brace were replaced with genuine carbon fiber parts. Both shock towers are 3mm thick with reinforced ribs to increase their overall durability. The original design is carried over to these new towers, but they offer more setup possibilities thanks to additional mounting holes in both the front (one extra hole) and rear (two extra holes). The rear transmission brace is slightly thinner at 2.5mm, but it also uses reinforcement ribs to increase its strength. It also uses the original geometry in its design, but it is more streamlined than the stock component, and has eliminated the unneeded holes that were included with the original part (the original came with seven holes). And since the carbon fiber is also more rigid than the original fiberglass and molded plastic, this will make the truck feel more responsive and stable too. 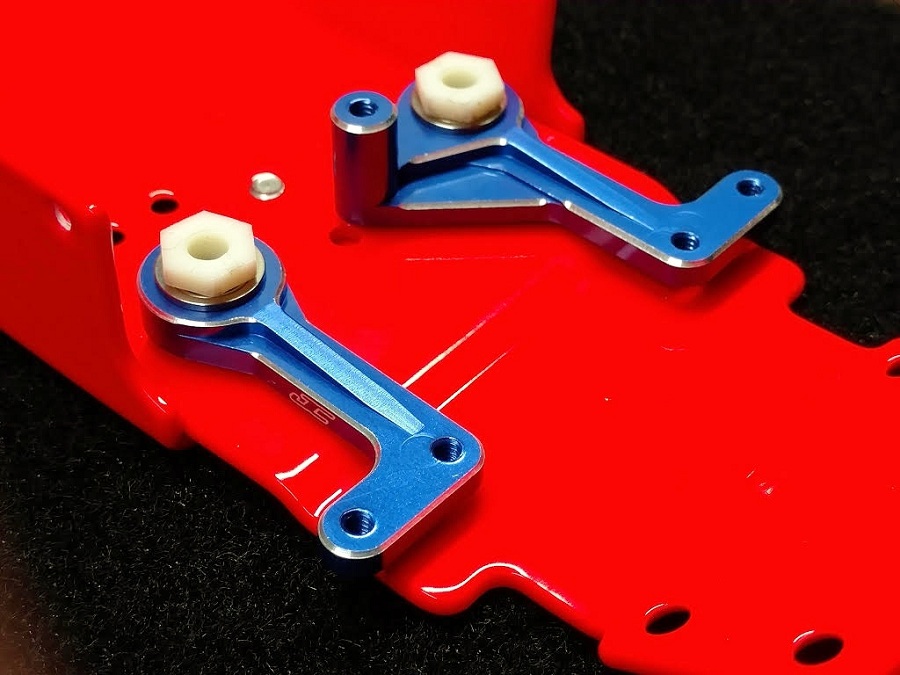 Next, the original white molded plastic steering bell crank set was replaced with JConcepts aluminum bell cranks. For the RC10 JConcepts does offer an aluminum bell crank system that includes everything you need to convert over to their aluminum system, even the gold flathead Philips screws that hold it all together. But the bell cranks for the RC10T are different than the RC10, so for this Garage build these bell cranks were specially made. And just like the JConcepts RC10 bell cranks, the servo saver has been eliminated with this design since today’s servos are more robust and less likely to strip out a gear. 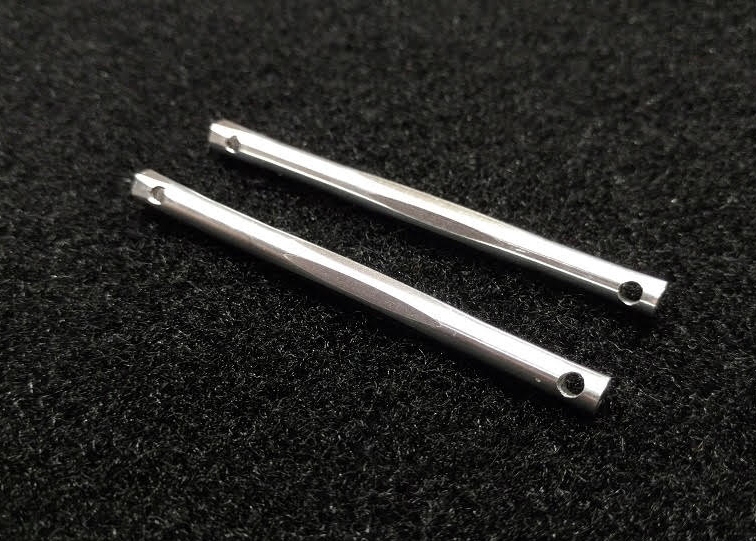 To finish off the front end Csontos next installed some JConcepts’ silver diamond nose brace tubes. For a while now JConcepts has offered diamond nose brace tubes for the RC10, but since RC10T calls for a longer tube these were custom made for this Garage build. But, just like the RC10 version, the nose tubes use a unique hex design in the middle with a diamond pattern cut into it. And just like the stock nose tubes, one end of the diamond tubes has a small hole in it that is used to attach it to the chassis. 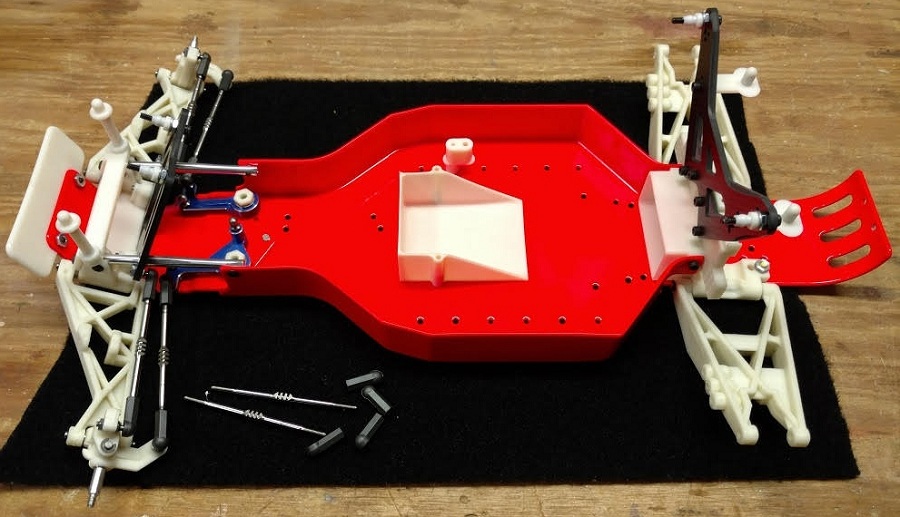 After that was complete the RC10T was decked out with JConcepts Fin titanium turnbuckles for both the control arms and steering rack. These turnbuckles are made of high-grade, machined titanium material and threaded perfectly into the kit’s standard ball cups. The “fin” cuts highlight the center location of the turnbuckles where adjustments are made, and they also feature a mark on the left hand side to help you keep track of setup changes made to them. 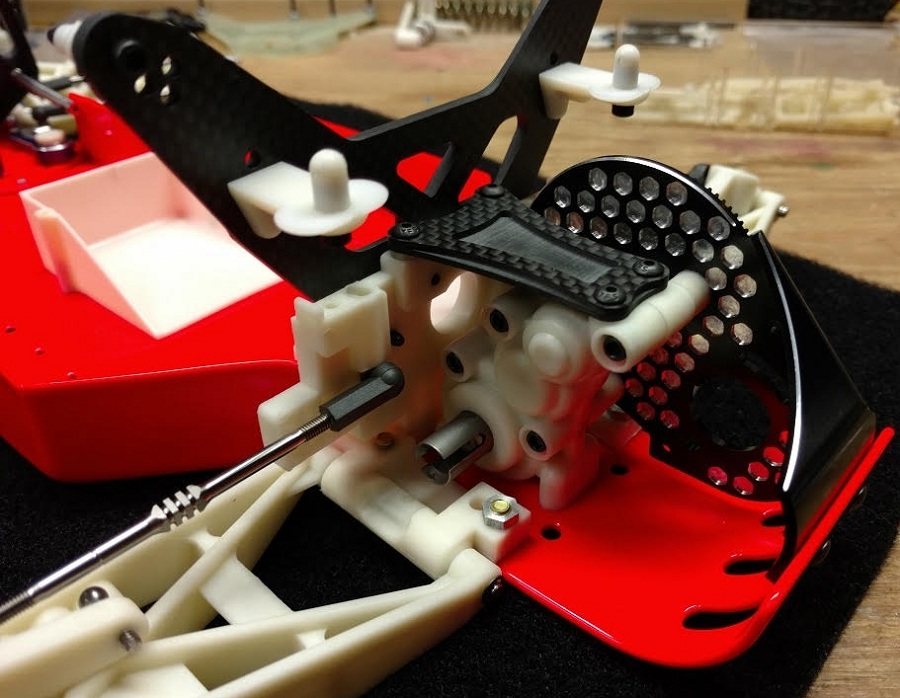 The final piece of the puzzle was to swap out the stock motor plate for JConcepts’ aluminum Honeycomb rear motor plate. Available in either blue or black, this anodized motor plate is lighter than the stock version thanks to its milled honeycomb pattern. It also incorporates silver chamfered edges, and a raised heat sink “shield” on the back. 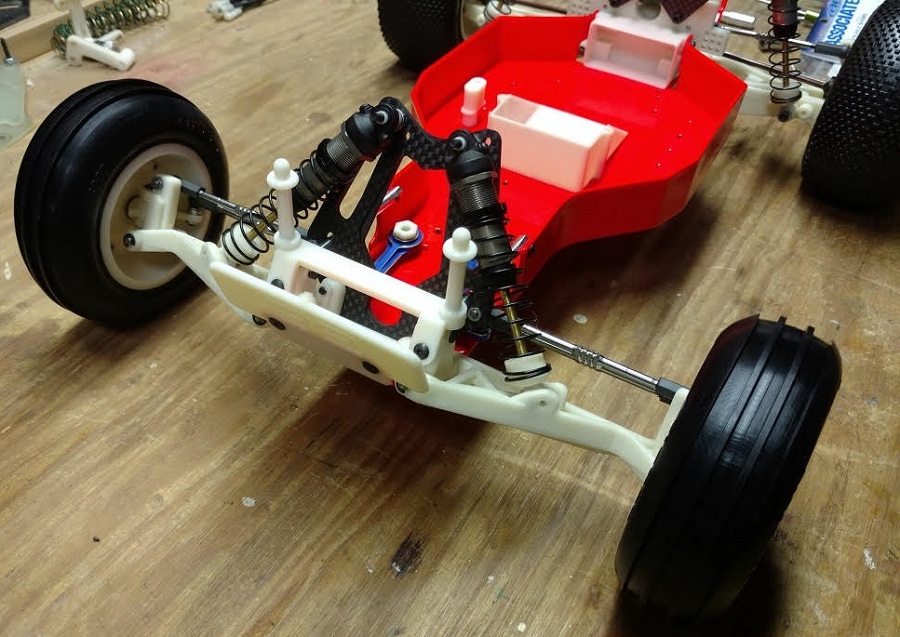 Once that was complete some fresh rear truck Double Dees and front J82 Groovy tires were mounted onto stock 3-piece wheels to complete the vintage look of the original RC10T. 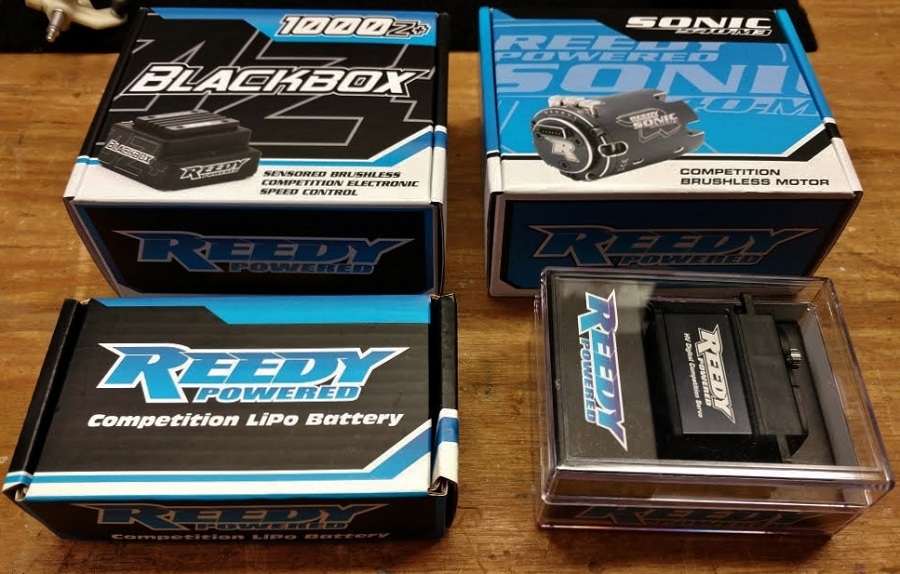 Now that the truck was built it was time to install the electronics. Back in 1990 Cliff’s truck was powered by a mix of Reedy and Novak gear, but for this build the 2017 RC10T would be all Reedy powered. 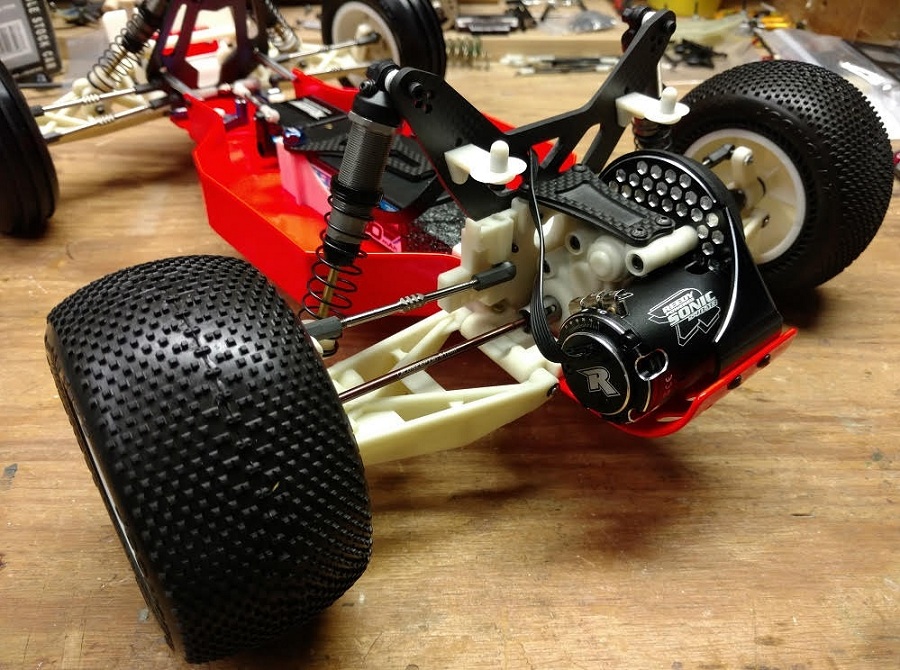 The power plant chosen for this truck was a Reedy Sonic 540-M3 7.5t modified brushless motor. 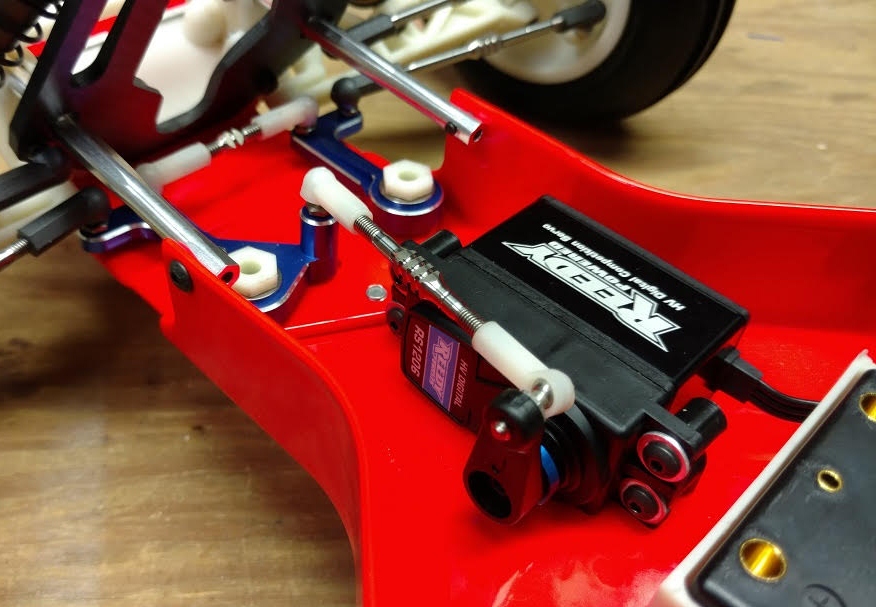 To power the RC10T through the turns Csontos installed a Reedy RS1206 digital HV hi-speed servo. 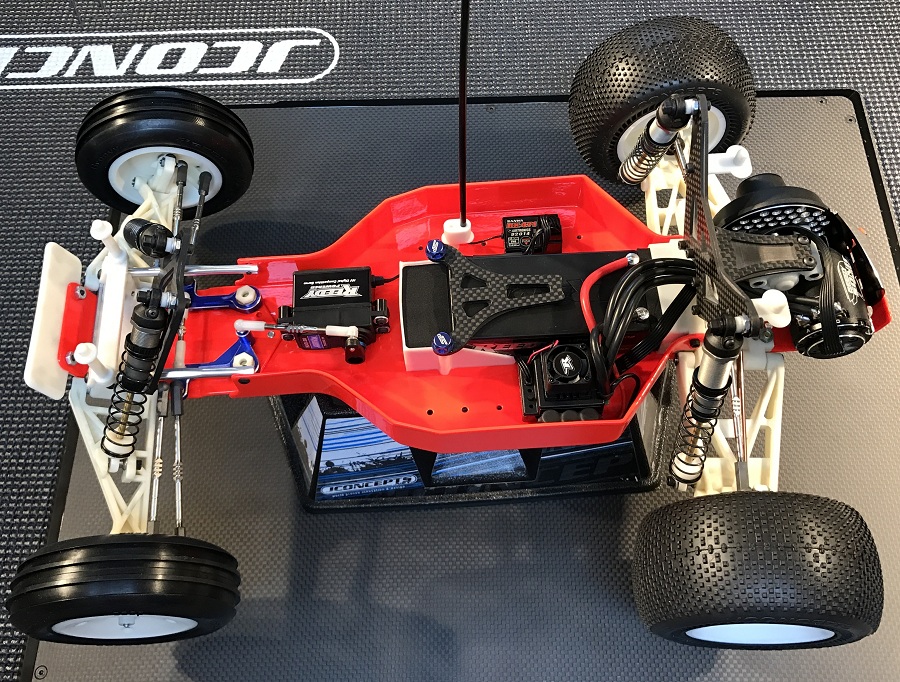 Everything would be controlled by a Reedy Blackbox 1000Z+ competition ESC, and providing power to it was Reedy's 5300mAh 70C 7.4V LiPo shorty pack. Since this LiPo is shorter than the stick packs that were popular at the time some foam was used to help fill in the gap in the battery compartment. And to lock everything in place Csontos used a combination of the JConcepts Monroe carbon fiber battery brace and battery thumb screws. This strap is shorter than the stock version, and it also increases your options for battery compatibility and mounting locations. The strap is comprised of genuine 2.5mm carbon fiber material and is long enough to secure your pack in place. 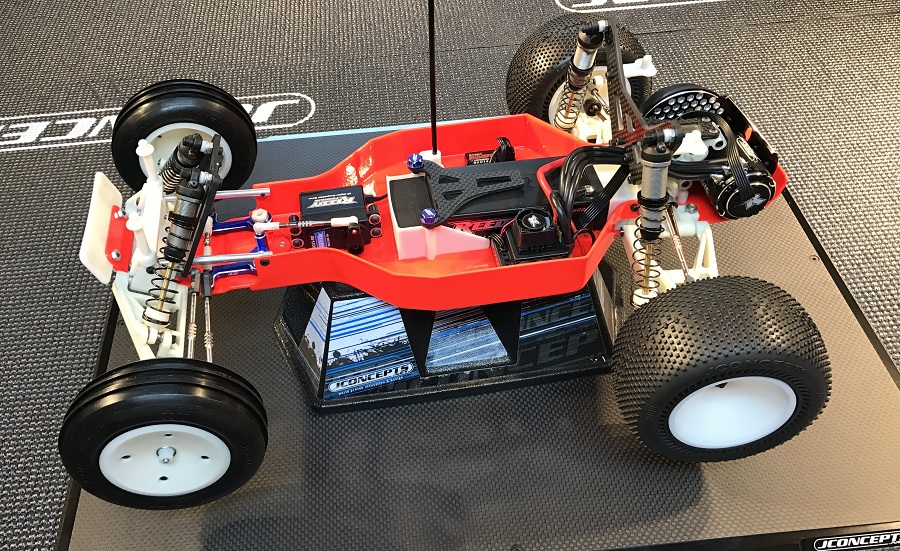 The stock battery strap was designed to be secured with two 4-40 x ½” screws, but the Monroe brace calls for the use of JConcepts’ battery thumb screws. These thumb screws are available in either blue or black colors, and can be easily installed by hand or with an 11/32” hex driver. A pair of set screws are needed to complete this setup, so a package of Team Associated Factory Team battery strap thumbscrews were also used. 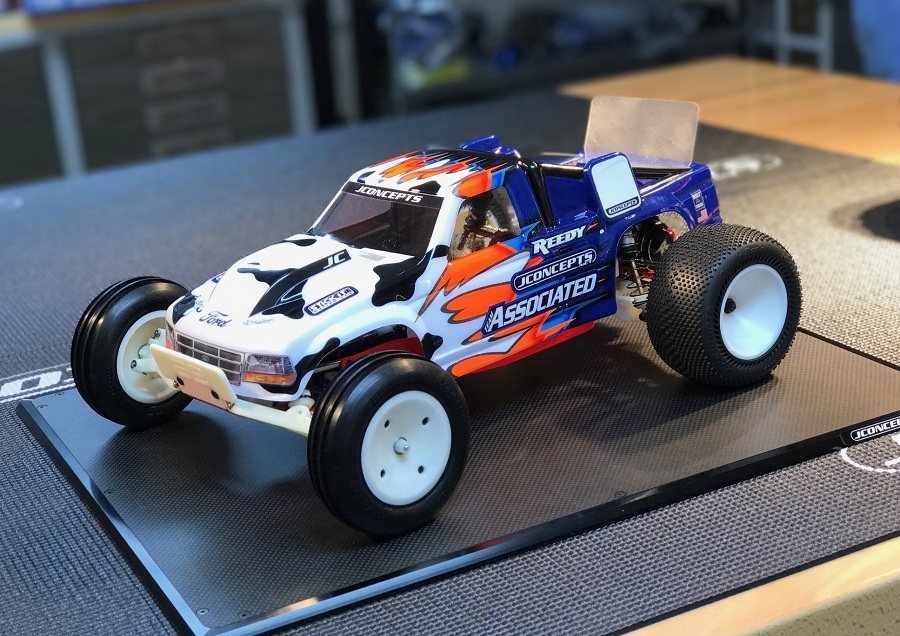 Now that the electronics were installed and secure, it was time to add a Darkside Designs freshly painted JConcepts 1993 Ford F-150 RC10T body. This officially licensed body is inspired by Ford's 1993 F-150 truck, and is a direct fit for the RC10T. The body was sprayed with Lett’s iconic cow paint scheme in the front, while the rest of the truck used a mix of classic and modern paint techniques. The final touch was to add some decals from Stickit1Racing, and now the 2017 Cliff Lett truck build was complete. 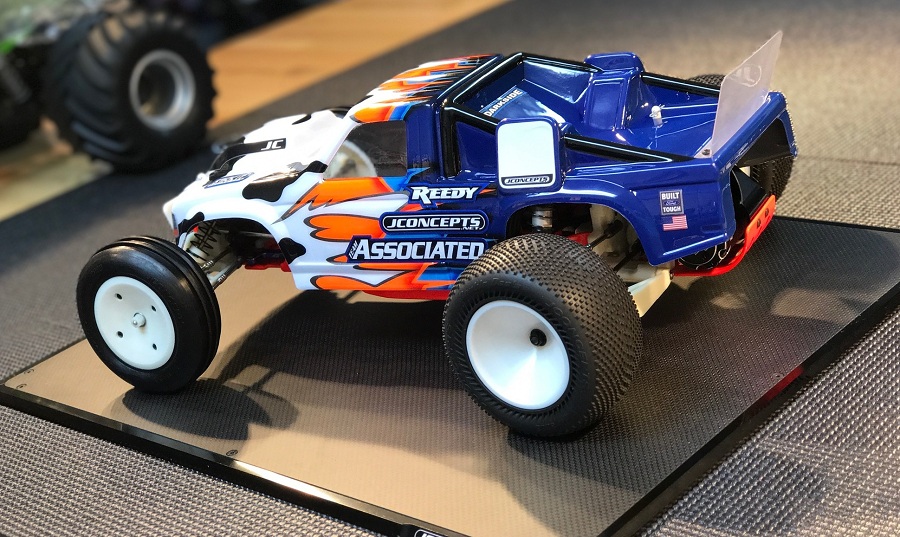 I hope you enjoyed this edition of the Garage, and a complete list of the items featured in this build is listed below: